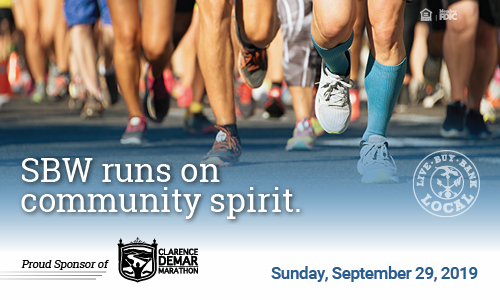 Proud to be the savings bank of our community – from start to finish.

Savings Bank of Walpole is proud to once again be a sponsor of the Clarence DeMar Marathon which will be held on Sunday, September 29. Hosted by the Keene Elm City Rotary Club, the DeMar marathon and half marathon starts in Gilsum and Surry NH, respectively and ends on the campus of Keene State College. In the last five years, 6,000 kids, 350 seniors age 70+, 2,900 half marathoners, 1,750 marathoners and 1,500 volunteers have participated in the DeMar Marathon. It is the city’s premier athletic event and attracts runners from all over the world.

Proceeds from the marathon fund a number of the Rotary Club’s important initiatives including the Sneaker Project which has provided 2,866 2nd graders with sneakers in an effort to reinforce the importance of Moving Everyday as well as Monadnock Understands Childhood Hunger (MUCH), which donates over 400 food boxes to the area’s neediest families so that area children won’t go hungry when school breakfast and lunch programs shut down during vacation time.

Whether you’re a serious marathoner, a recreational runner or prefer to cheer from the sidelines, the Demar Marathon gives you a chance to make a difference in our community.